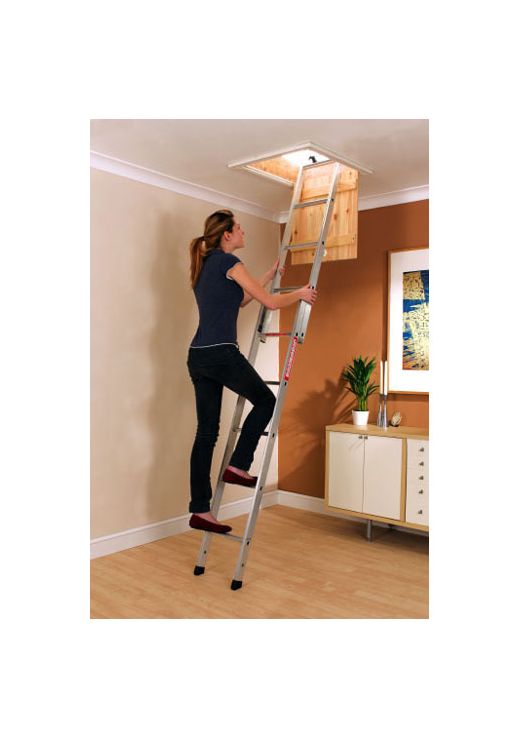 Skip to the beginning of the images gallery

Item
LYOLO-2039
£57.17 £47.64
This aluminium sliding loft ladder is ideal for occasional use in the home. A quality two-section standard domestic loft ladder, it fits openings as small as 457 x 406mm.
Read More & See Specifications
Order within to be shipped by Tuesday, 14 Jul

From:*
To:*
Description
Specifications
Delivery & Returns

Please note, not all delivery options are available for all products. All delivery times are subject to stock availability and order being placed before 12pm, Monday to Thursday. Please also be aware that some items may arrive separately due to various stock locations.

Where Do You Deliver To?

We deliver to all postal areas in the UK, including England, Wales, Scotland, Northern Ireland and the Channel Islands.

Please note, an extra delivery charge will be applicable for deliveries to Isle of Man, Northern Ireland, Republic of Ireland, Scottish Highlands & Islands, Isle of Wight, Jersey, Guernsey and the following postcodes: AB21-56, PH11-44, IV1-56, PA20-88, All ZE, HS, KA, KY, G84. One of our Sales Administrators will contact you with the details.

Deliveries to these postcodes are likely to have a longer lead time. This is due to the couriers used to access these locations.

How Much Does it Cost?

What if I'm not in when you deliver?

Ladderstore.com deliveries are made on Mondays to Fridays (unless a Saturday pre-noon delivery has been requested) between 9am and 5.30pm. We realise that occasionally we may try to deliver an order and you (or the intended recipient) may not be available. If there is another location to leave the delivery such as a safe place or with a neighbour the courier may opt for one of these alternatives. If it is not possible for the courier to leave the item elsewhere, the courier will leave a card at the delivery address confirming that they have attempted delivery. This card contains a contact number so you can speak directly to the couriers and agree a mutually convenient delivery time or alternatively, to arrange for you to collect the order directly from their depot. After three failed delivery attempts, your items will be returned to our warehouse. If a delivery has failed there may be an administration charge for failed deliveries.

Can I send things to more than one address?

We are happy to deliver all or part of your order to addresses other than your own. You'll have the option to tell us where you want to send the items in your basket during the checkout process.

What do I do if there is a problem?

First of all, an we cannot emphasise this enough, our couriers operate right up until 5.30pm every day. In the event that there is a problem the best course of action is to call us on 01204 590 232.

What if the delivery looks damaged?

We need to know within 24 hours if there is a problem with your delivery. If the delivery looks obviously damaged please refuse the delivery. If it has been left, or posted, then please retain all the delivery packaging and contact us. Before returning anything to us you need to contact us and get a Returns Number. We will need an image of the damaged product in order to process your replacement or refund. When returning the product it must be adequately re-packaged when returning to us. If you have any questions, or just want to confirm the details before you order then please call us on 01204 590 232, or by email on [email protected]

If for any reason you are unhappy with your purchase, you can return it to us in its original condition and in adequate packaging within 30 days of the date you received the item for a full refund. If we need to arrange a collection on your behalf we will inform you of these costs before collecting your item and this amount will be deduced from your refund.

Certain items are excluded from this guarantee. This includes items that are made to measure or made to order.

Please Note - If you are a business there may be a restocking fee, depending on the item ordered.

Please ensure that you contact us before returning anything as you will need a valid returns number to accompany your products. At this stage we will advise you on the next steps, as some items will be collected from you. If you have any questions, or just want to confirm the details before you order then please call us on 01204 590 232, or by email on [email protected]

How Do I Cancel an Order?

If you want to cancel an order that has not yet been delivered then you need to contact us as soon as possible. We will try and stop delivery so that a delivery charge is not incurred. Orders are normally processed immediately so we may have already packaged your order and made arrangements for it to be sent to you. If this is the case then we cannot always stop the order from being sent.

If you have received a delivery and you want to cancel the order, and return the goods, then you need to call, or email, so that we can send you a returns number.

In both cases it will be helpful if you have the order number (from your order confirmation, or any update emails) and the date you placed the order handy. We will take some details and give you a returns number. This number has to accompany the return, both on the oustide of the packaging and somewhere inside on a piece of paper.

We will expect the goods to be received back in our warehouse within 10 working days from notification of cancellation.

Please note: We will not refund your costs in returning the item to us unless you return the item to us because of an error on our part or because it is faulty. If you are a business there may be a restocking fee, depending on the item ordered.

We cannot cancel items made to your requirements if the manufacture of this item has been started. If you wish to cancel a bespoke product and the technical drawing has already been created, there may be a charge to cancel your order.

For your protection we recommend that you use a Recorded Delivery service. We cannot issue refunds for goods that fail to reach us. Please note that you will be responsible for the cost of returning the goods to us unless we have delivered the item to you in error or the item is faulty.

Our returns policy does not cover goods made to order or bespoke items. They are not returnable.

How Do I Return My Order?

Please ensure that you contact us before returning anything as you will need a valid returns number.

We will then advise you what address to send the return to or arrange a collection of the product. (If damaged)

When Will I get My Refund?

All returns arriving at our warehouse are processed within 3 working days. Unless we need to contact you further your refund will usually be processed with 7 days of receiving the returned goods and the absolute maximum time taken should be no more than 30 days from you first contacting us to organise the return. Please remember that you will be responsible for the cost of returning the goods to us unless we have delivered the item to you in error or the item is faulty. If a discount was applied to your original order, the amount refunded will be adjusted to allow for the revised order value and appropriate discount level.

Depending on how your order was paid for will depend on how we process the refund. Please see below for more information:

Payment via Card Online - Our system use Sagepay and this encrypts your card details. We are however able to refund you on the card which was used at the time of purchase. You will usually see this refund on your bank statement within 3-5 business days.

Payment via Paypal - Paypal refunds are refunded directly to the account who made the purchase. This will usually show in your account within 3 to 5 days.

Payment on Account - If your payment has been made by purchase order we will issue you with a credit note against your account.

Payment via Phone - Any payments taken over the phone use a analoge phoneline to keep your data secure. We key your details directly into a terminal which uses a seperate 4g connection. As we do not store your details at all, we will require you to give us a call with the details of the card you paid on to make the refund.

Payment via Bank Transfer - If you have paid for your order via bank transfer, again we do not have your bank details. In order for the refund to go ahead we will need your account number and sort code to process the refund.

About your Statutory Rights?

Returning goods to Ladderstore.com for any reason does not affect your statutory rights. By law, customers located in the European Union have the right to withdraw from the purchase of an item within seven working days of the day after the date the item is delivered. For more information about your statutory rights on the Which Consumer Rights Website.

This loft ladder was the only suitable one that I could find that would fit into my available loft area. It does the job fine. Certainly recommend the item and the company.

Bought for a 500mm x 500mm loft hatch. The ladder itself is fine, but it's practically impossible to push back up into the hatch using the stick provided. The stick is slightly more sturdy than one with a previous ladder I tried, but as the stick goes into the SIDE of the ladder, the ladder will twist sideways and get stuck so it won't slide up - then you end up bending the stick... Also for pulling down through the hatch, the feet of the ladder get stuck on the hatch - so the ladder won't budge and the stick is just not strong enough to try and manouvere it. If you buy this ladder you'll end up standing on a chair/stepladder to get it in and out of the hatch!

Very good value for money. Delivered before the date that was given. A very satisfactory deal. The ladder works very well. Just one comment. A saddle type clip in the center of the bottom tread would keep the ladder straight when putting it back.

The diagrams could have been a lot clearer.

Great value product. Easy to install. Clear instructions and all necessary parts supplied. Changing the hatch to hinge and open downwards took about half of the time. The actual fitting of the ladder was very straightforward.

The catch, as designed, does not work. It is restrained to only move through a limited angle. This wasn't enough to both catch and release the hatch. I had to cut a bit off the white plastic that fits on the trap door so that the catch could rotate freely through 360 degrees. The bottom step was badly bent when it was delivered. I had to bash it straight. It still looks bent but it is perfectly safe to use. Pay attention to which screws are used for which part of the assembly.

Very good quick delivery and ladders took an hour at most to install in my house, they're very sturdy and still look like they will last a long time now after been installed a few months, good service all in all. No problems when fitting all fitted fine, a bit dodgy as the hold into the loft is right at the top of the stairs but its ok as long as I go steady! Very happy overall, look like they will last a long time!

You May Also Need

You have added to your basket.